So I’m just back from an amazing trip to Austria. This is somewhere that somehow I have never been previously. Having spent so much time in the Alps when I was a wee bit younger, Austria some how slipped by. So once the online entry opened for this years Youth colours climbing festival in Imst, I was super excited to go. 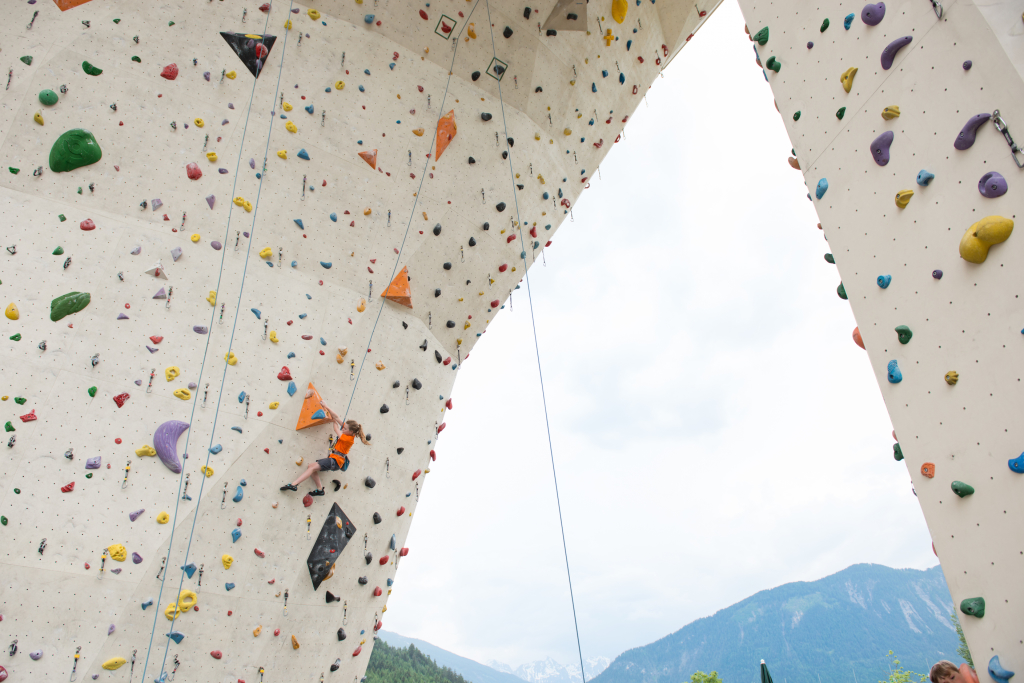 The main purpose for my visit was to help 4 young climbers that I work with in south wales compete in their first, European competition. Secondly It would be a great insight to how far off the pace we were with the level of performance that we could deliver.

As with any trip that involves air travel, the journey day seems to last forever. Fortunately we were lift sharing with Gwen and her family so only had to drive to Cardiff, from here Jezza took the con’s and got us safe and sound to Luton.

Luton Airport, an airport I have never traveled from prior to this trip, and know on a list of places i’d rather not go again. Its alright, relatively clean but the UK seems to have something wrong. I am a paying customer, yet treated like scum. Their is no need to be rude to me, or treat me like I’m stupid, in fact for those that know me this will only lead into a negative spiral of sarcasm from me. Any way with out this rant continuing, its fair to say I was not impressed with the members of staff that I came across. 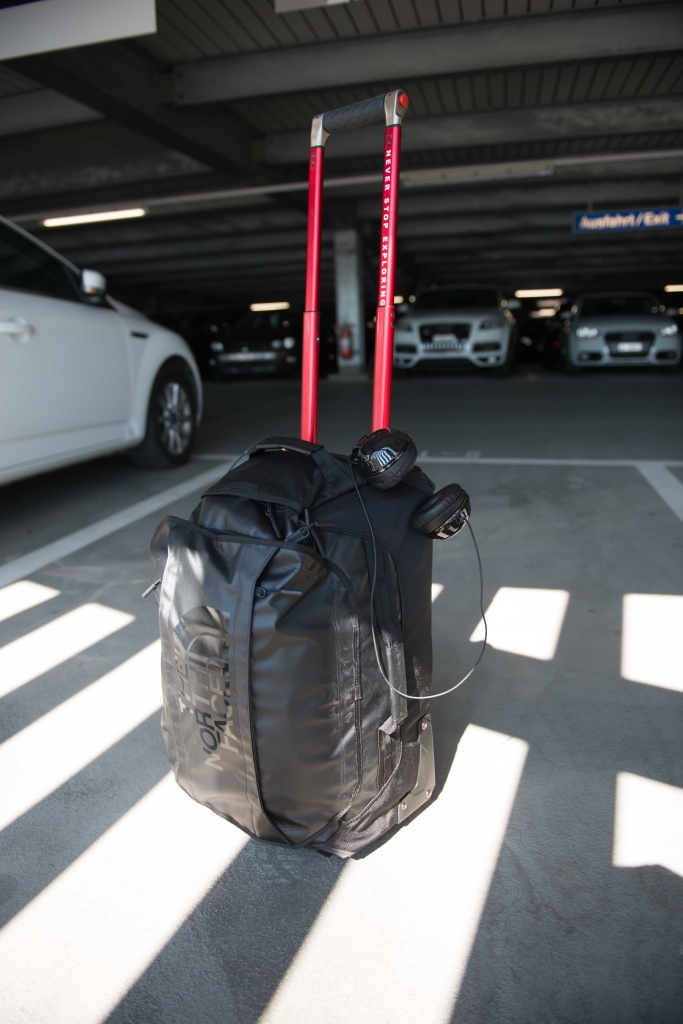 On the plus side though this was the first trip I had travelled with hand luggage only and also the first trip I had used rolling luggage (thanks mum for the new pack it amazing) which made up for all the frustration of luton airport as I no longer had to wait around like cattle being herded for slaughter, and could simply walk on through.

On arrival in Switzerland it was immediately apparent how much more relaxed everything can be in Europe, no hussle and bustle or confrontations at every stop. Instead people actually smile as you go through passport control. Here we met up with Oscar and Emily (plus family) and some silliness ensued as we waited for parents to sort hire cars. 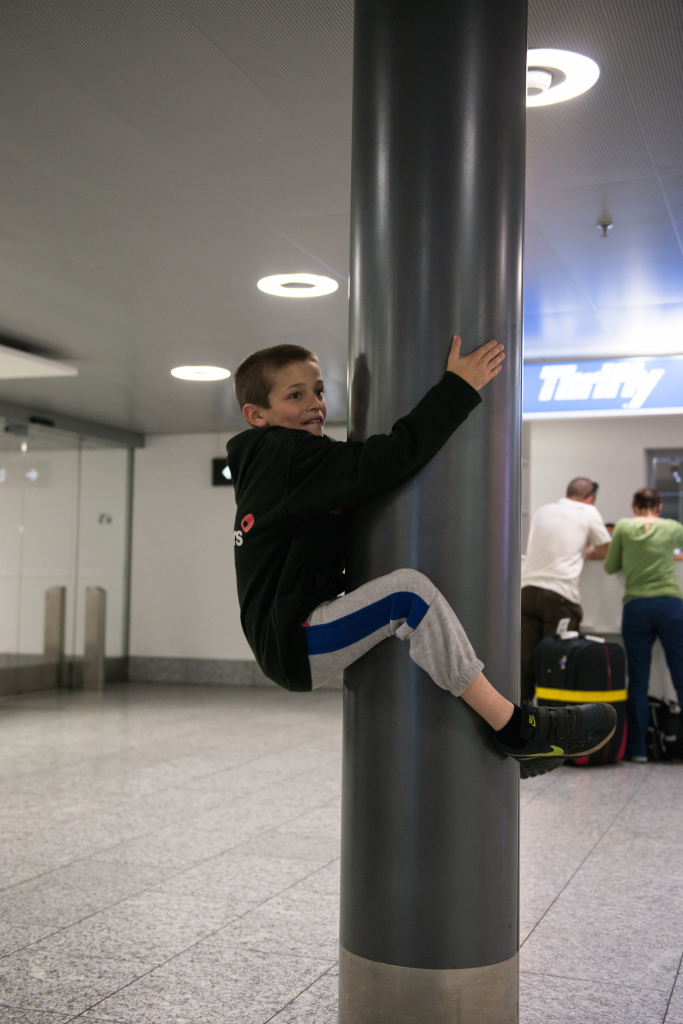 Oscar warming up in the Airport

The drive through the foothills of the swiss alps and into Austria was beautiful, bringing back memories of why I used to climb here so much. I was actually pleased as a 14km tunnel was closed and forced us to climb over a high mountain pass and take in the stunning scenery. Eventually we arrived in Imst and sorted our accommodation for the night. An Austrian guy called Hienz met us, with a large smile and he showed us around our pad for the next few days. 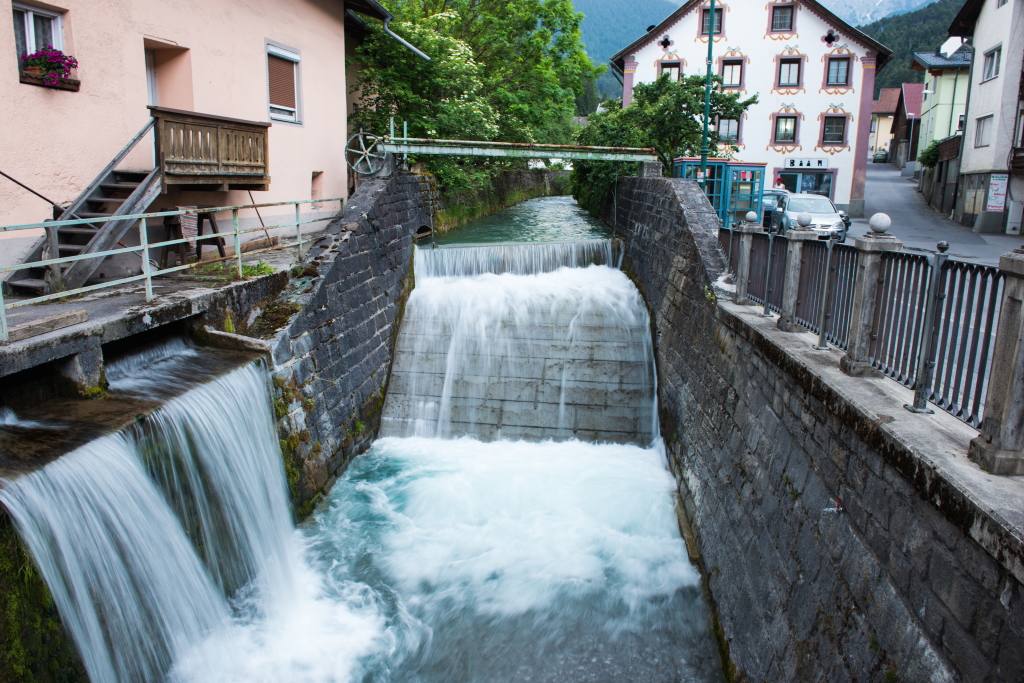 walking around Imst (quite pleased as i shot this hand held)

The morning led to Jezza waking us up at god knows what time to go to the supermarket! It must have been 0600! We had to wait till the supermarket opened we had arrived so early, I’m wondering if he wet the bed, but anyway we got some food for lunch and headed over to the climbing centre. 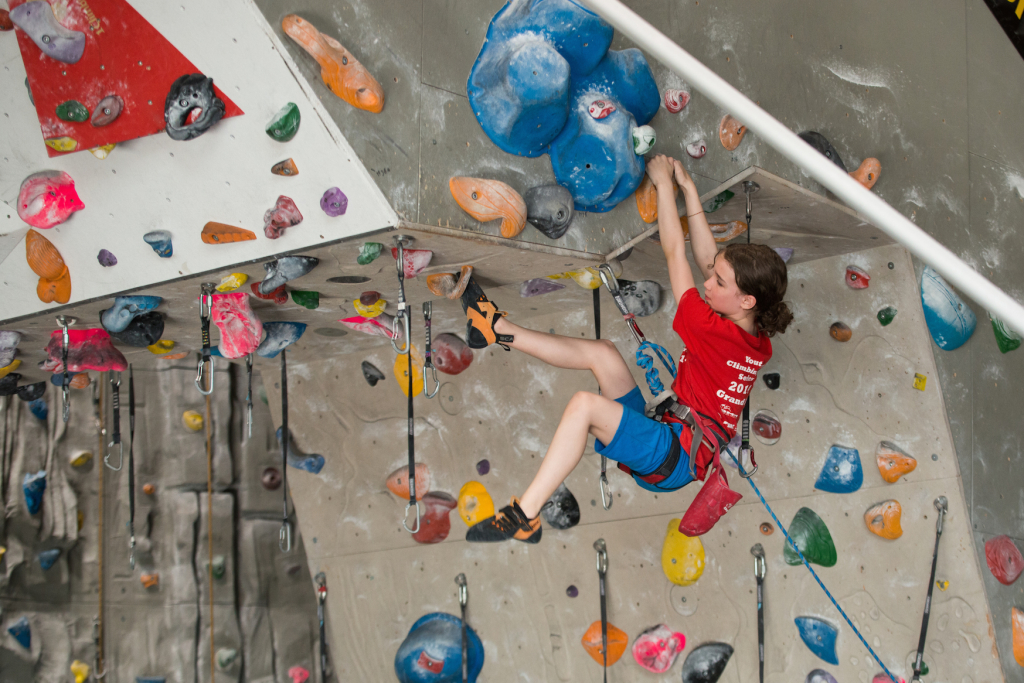 The Centre is fantastic with amazing facilities for many sports, the most obvious being the large outdoor climbing wall. As route setting was till taking place we could only see the wall from a distance and as such we headed indoors to there original training facility. This wall is old, I’m not sure when it was built but it is an amazing structure that i would gladly swap for many of the UK’s newest walls. The first observation was the number of harder routes on offer, with multiple 8b’s and an 8c, straight away allowing young climbers to dream beyond the seemingly glass ceiling we have in the uk were walls never set beyond 7c (few exceptions). Also the bouldering was an old school style woody with no set problems, instead holds in every T nut allowing climbers to play, and make up there own challenges. This is something I will try to bring back to boulders and our new bouldering area, as the benefits seem huge! 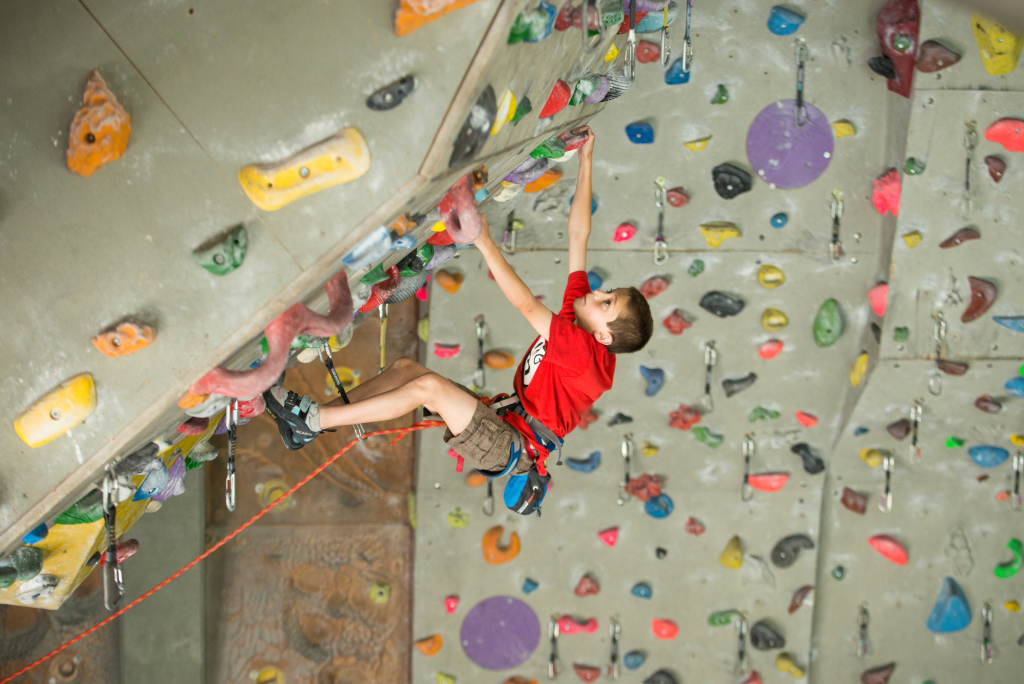 Emily had competed at this event the previous year so was able to give us the heads up on how the day runs and what to expect. Jane (emily mum) also had the beta on were to set up camp to avoid the heat during the day, so a plan was hatched to arrive super early to A. get parked before 280 competitions turned up and B. establish camp under the only tree. Emily on the pretend 8b, you had to be there.

The comp is unlike any I have been to in the UK with youngsters climbing unto 10 climbs over 2 days giving them plenty of time on the wall. It was actually impressive how with a small army of volunteers the staff at Imst managed over 280 competitor around 8 climbs on opening day, thats well over 1000 ascents taking place. And all of this through some amazing weather conditions, first of the heat was killing us with the youngsters having to go cool off in the fountains between climbs to keep heat stroke at bay. Then as the afternoon wore on some large electrical storms brought havoc to the site, but still the comp kept going through the wind and rain until all had completed their goes. Gwen in action on the amazing comp wall

It goes with out saying I am very proud of the young climbers that we accompanied to Austria as they each achieved great results and pulled out stella performances on a much larger stage than they have experienced before. Emily can agonisingly close to a podium with some gutsy climbing, whilst her brother Oscar took a huge step in controlling his emotions that allowed him to up his game each climb. Infant he had become so calm that whilst others were loosing there spirit in the storm he cruised his way to the top of a route that had seen many sag back onto the rope. Gwen and Anya both did fantastically well showing they have what it takes to push there climbing to the next level and although both seemed nervous to start they both pushed on with the best once they found their gears. 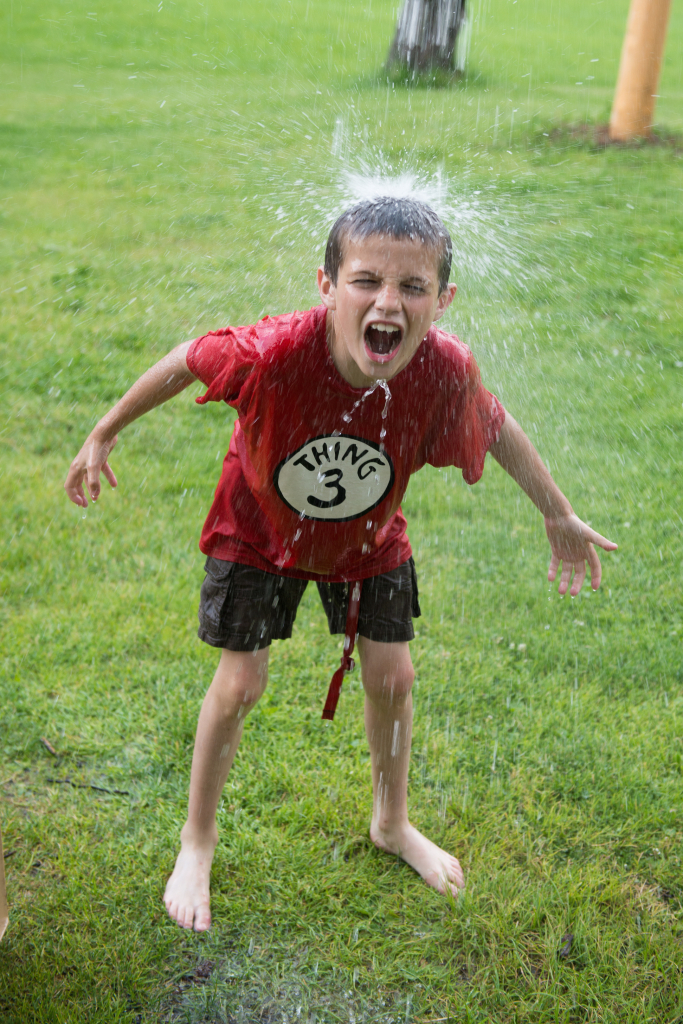 Outside of the comp was a hoot witch actually is one of the best and most forgotten about bits of comp climbing. The youngsters get to travel, make new friends, experience different culture and all the other cool stuff that climbing can give and this was no exception. Watching them all play on a trampoline in the pouring rain, or seeing Gwen make her way down the 3km Alpine Coaster was as much a highlight as the competition. Unfortunately I think that I missed the best bit as Oscar and Glynn (his father) were planning a Mentoes and cola experiment that could only end one way!

We will be back in Austria next month for the another open European event at Petzen so hopefully with some more experience we can start attacking the podium positions.

Emily keeps her own blog and you can read about her experience here.

I even found a brief bit of time to have a play with some photography, and I’m very pleased with the result. Im keen to do some more landscape style shots as I’m terrible at it so I have been practising a lot around home but have been struggling to get life into the shots. After the first day i noticed all of these amazing hay barns across form the climbing centre so an early morning alarm and hey presto a shot I’m pleased with that does not have a climber in it. There was a little play on Lightroom to remove a blemish and to add contrast to the sky (I used a grad filter to lower the exposure on the sky) , and a slight raise in clarity. Anyway I like so hopefully the practise is paying off.