Just back from a great but long weekend in the South West, as it was The Quay’s, now annual  DWS event. Having run, in my eyes, one of the most successful climbing competitions in recent memory last year I was super eager to get back and get involved once again. Unfortunately a year is a long time and many things have led to me not being anywhere near my best with my climbing, although things are looking up, and also being away during the online entry left me believing that I had missed out on the opportunity to take part. Not to worry Emily and Crystal were competing and we decided it would be an amazing event to just hang out at regardless. One of my favourite parts of this festival is that you get to catch up with so many friends that you only see now and again so the decision to pack the van for a long weekend was a simple one. 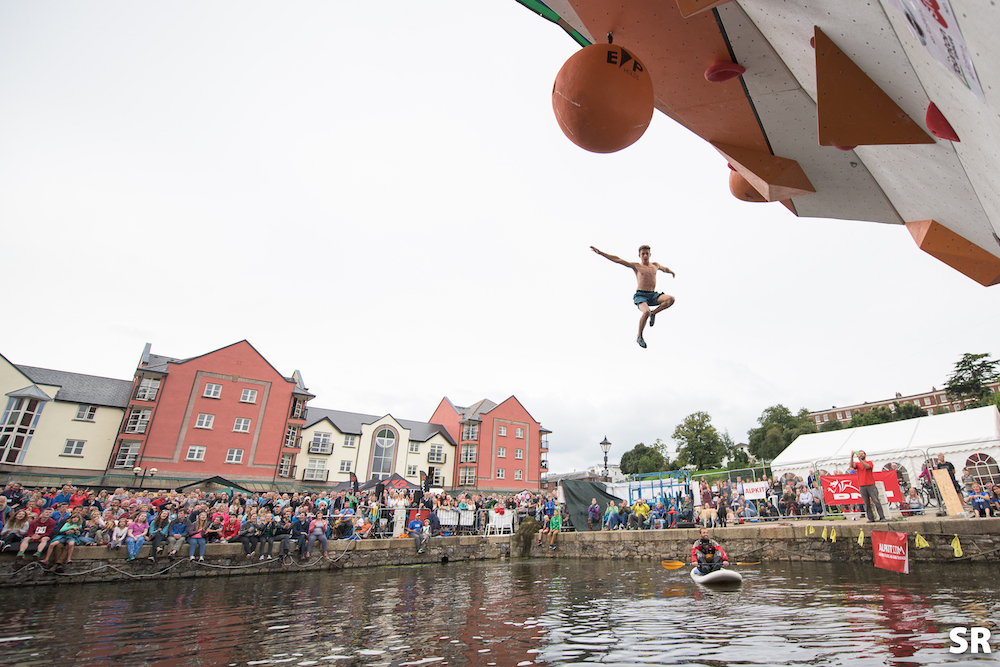 Friday was to be the under 16 qualification round so Emily and Crystal would be in action, I simply had not read the timetable so after an early morning wake up and a quick stroll around to the canal, the realisation that this would not be happening till late afternoon left me at a loose end for the day. No dramas as Ben West and the Bloc fest Team, Gaz Parry, Gav Symonds and Mike Langley were putting the final touches to their qualifying routes and without a second passing they were giving me some banter about my crap excuses for not entering. Having not entered I had in the last week been at Andy’s tattoo shop, getting a new tattoo. This was not fully healed so when the news of a spare spot was given to me I was left wondering if a bit of cling film and gaffa tape might be enough to protect me from the murky canal. 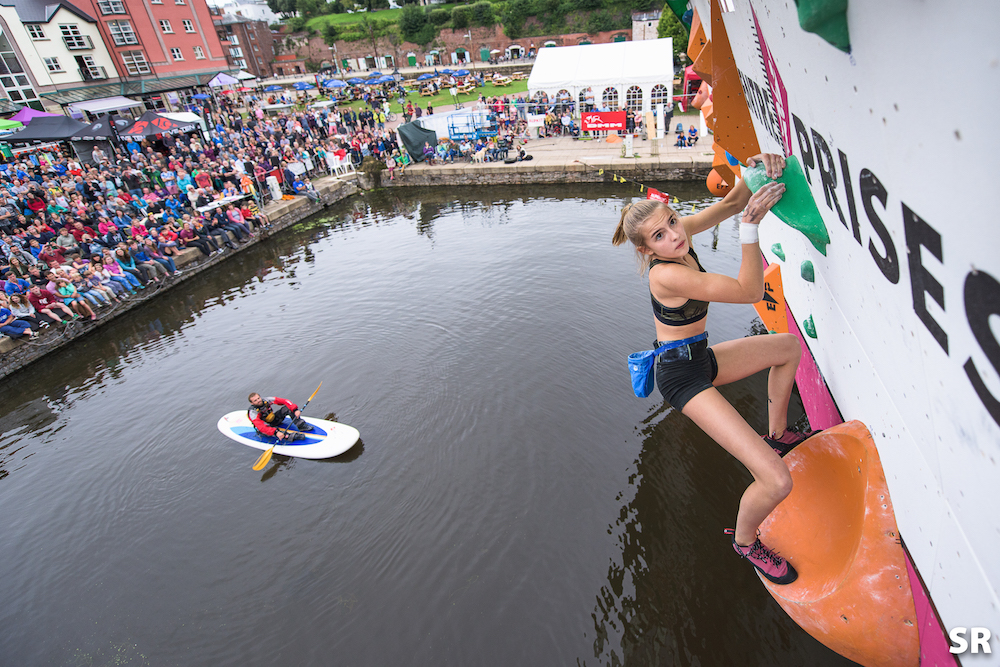 Once Paul Russell arrived on the scene, looking surprisingly calm considering the scale of the event that was about to unfold under his stewardship, a new plan was hatched. Last year I had been super keen to take some pictures from the top of the floating barge that the climbing wall is built upon, but there was already a team of Photographers present and not wanting to press the issue the opportunity was missed. Chatting with Paul and Alison revealed that this year no photographers were present and I could have the gig! Fortunately I had packed all of my kit to get some shots of the Emily and Crystal so I was made up that I would be able to get involved and take the shots I had wanted to the previous year. Suddenly though it had gone from taking a few shots of the team to potentially photographing the event, which is something I would love to get more involved with as shooting from the crowd rarely offers the best angles and opportunities to capture the feeling of what is going on. Qualification looked quite simple for the two girls so I could leave them to it whilst I concentrated on getting some shots, to work out where best positions would be. The event itself is a breath of fresh air for British climbing competitions, being run to a strict and efficent timetable. This means the action is thick and fast with climbers attempting Three routes of increasing difficulty. Between each a climb a short rest allows time to dry shoes, find some more chalk or simply prepare for the next route. With this format once the first few competitors were finished the wall would very quickly be full.  Three competitors would now be climbing simultaneously on each of the routes, meaning action was everywhere with splash downs almost on the minute and some funky setting it was hard to know where to point the camera. 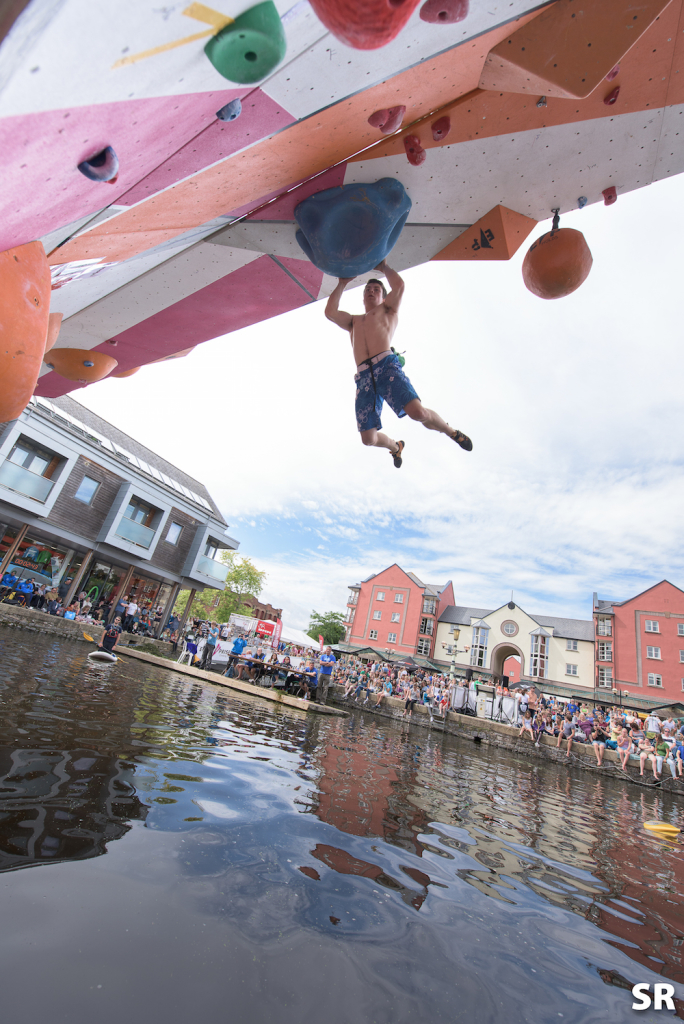 By the end of play on Friday it was clear that leaning over the wall was not as easy as I had hoped due to a slight kick in the final section meaning getting the obvious wide shot would require abseiling over the edge and there was simply no room amongst the competitors, also I would have to leave my trusty flash guns packed as no one wants that in their face whilst trying to battle the 7m routes to reach the next rounds. 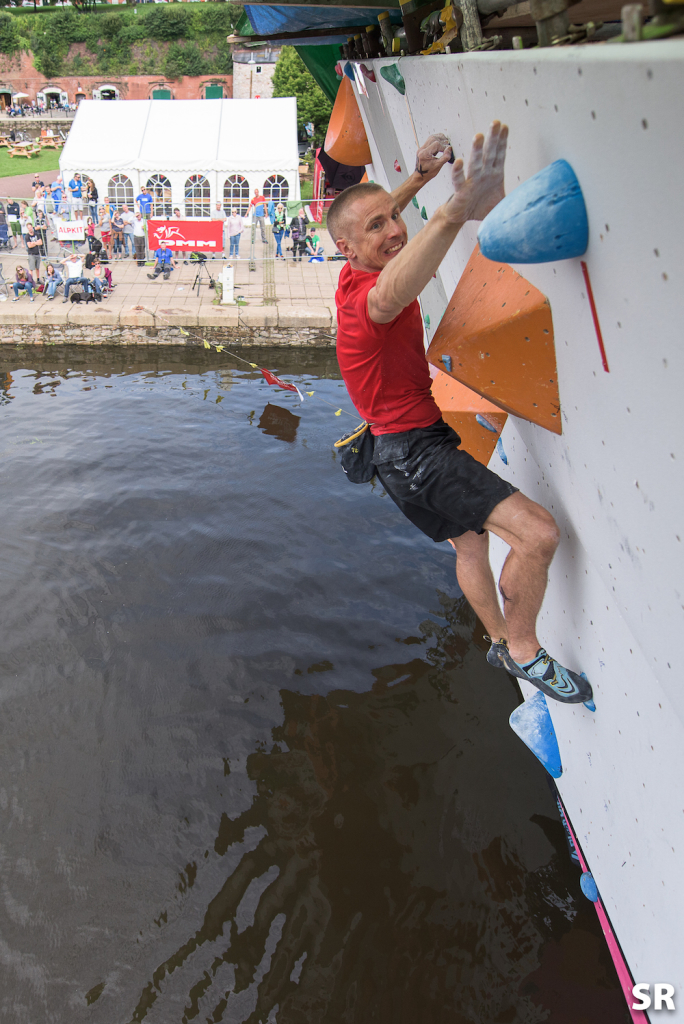 Both girls qualified for finals day on Sunday which left Saturday for the adults and many familiar faces would be having a bash, including the DWS king himself Neil Gresham. Personally I believe the fact that this event can attract the likes of Neil into the unfamiliarity of the competition environment is a testament to the quality of the event and to Neil’s love of the sport. Along side Neil there was a packed wads list of climbers from all over the UK keen to have a piece of the action, as well as many climbers simply out for a good time. Watching the event through a lens was an interesting experience giving me much more of an insight in to how hard these guys and girls are trying and although the gap between the strong and the not seems vast so much more seems to be in the desire to try hard till the end. 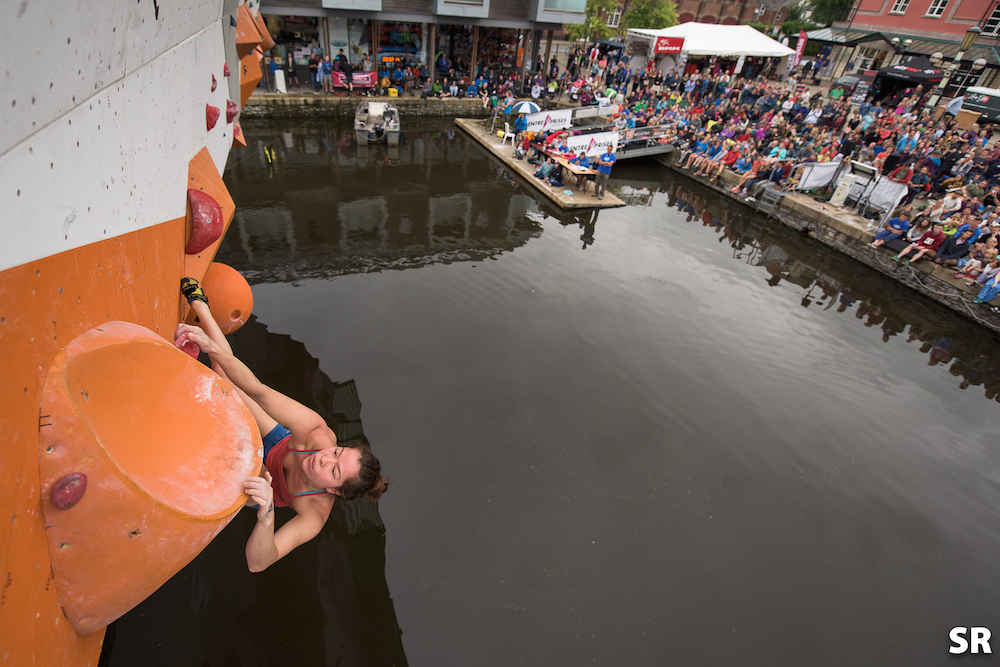 The setters rarely get the credit they deserve for events like this, but as with any event I have seen this team part of, it was pitched bang on. With the qualification phase allowing everyone to have great days climbing whilst still managing to trim the fat and produce the desired numbers for finals day. By the end of this day I had some great shots due to more favourable light than the friday, a bigger crowd and a more relaxed feeling. Now I felt that I was getting the shots I was hoping for, with some great comedy moments as well as the hard core action shots. 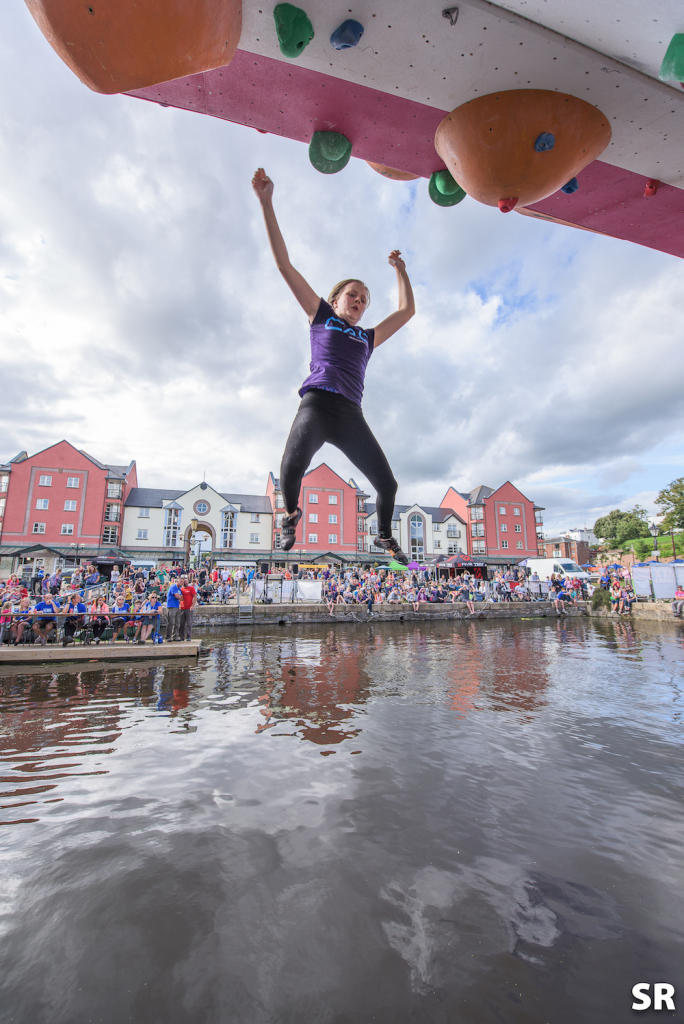 Sunday was to be Finals day with all the remaining competitors taking part in a semi final of the same format as the qualification round. From here the top 6  would go on to a final for which a new format had been devised. This year competitors would essentially race across a route of lesser difficulty, having to hit a bell to stop the clock. The fastest three would go on from here to a second lap, adding their two times together would give this years DWS champions. From a photography day I was at first a little upset that once again the day was overcast and actually looked like it may rain at any moment. The previous year had been blessed with some amazing light for the finals with the wall almost glowing, but it appeared this year that was not to be. It was during the Women’s semi final that the rain finally started and once again the route setters had to step in. Building a temporary structure with a tarpaulin to keep the wall as dry as possible and allow the show to go on. After an hours pause play resumed, and my worry that we may have lost the crowds was short lived with hundreds of spectators crammed onto the quay side . As all the finalists were decided it became apparent that Emily, Crystal and Rhos were all through. Shooting pics of the final was all rather hectic with climbers clocking times under 30seconds the new format was frantic. For the crowd this seemed to be a massive hit but for a photographer climbing around wet scaffolding it was not easy as every few minutes I would need to swap sides. The most anxious moment for me was definitely Emily’s final, as during qualifying she seems to have plenty left in the tank but with the new format it would not necessarily be the strongest that won it would now require focus and precision. Fortunately Emily has both of these skills in abundance and even after an amazing time was posted by her nearest rival she smashed the final and took the win. In doing so she almost smashed the lens of my camera as the bell was on a long string and she hit it with some real venom sending towards me as I peared around the scaffold taking photos. The rest of the finals went well with Rhos finishing an amazing 2nd place behind Emma Twyford, Tom Frost took the under 16 male victory and a super strong performance from Matt Varela Christie was enough to be the open male champion in 2016. 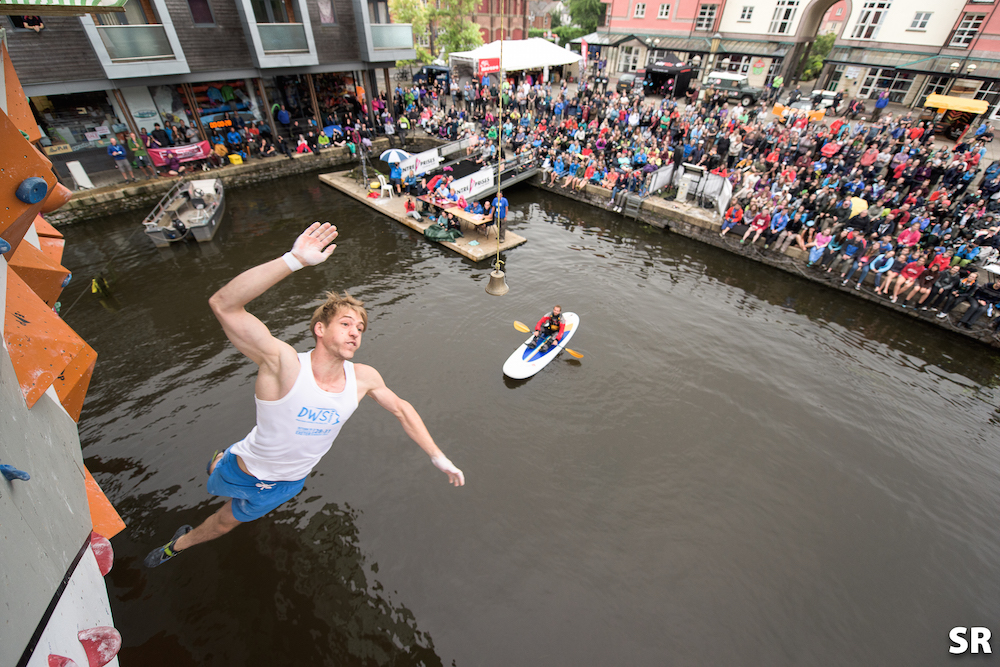