The Youngsters have been putting in the big performances around gower over the past few months with Jim Pope ticking the 8b+ getting headlines on UKC. But the local strong boys and girls have also been on fine form, and it will not be long before Elis gets his reward for putting in the hard yards.

Cai Bishop-Guest has had a great run of form of late, for once he seems to have survived a summer without hurting himself doing some crazy stunt. This has led to him breaking some new PB ground and in doing so he went on to repeat one of my favourite FA’s Achilles Wrath F8b. Hopefully he will continue this uninjured period and take his climbing to the next level. 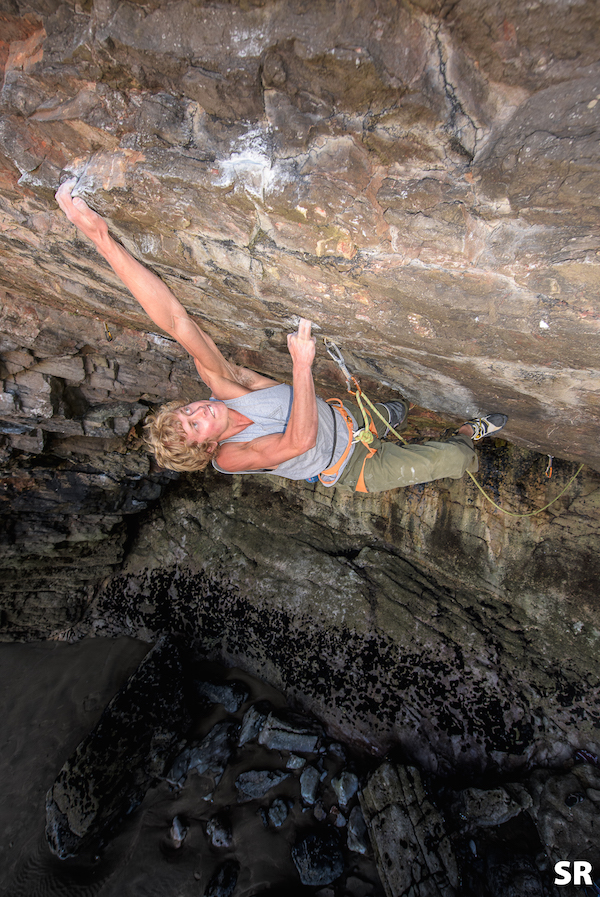 Chris Shepherd has been back in town whilst on holiday from studying the universe and he came within a whisker of repeating Rob Lamey’s new route at the cove. With a grade of 7c+, Rob must have had his tongue firmly planted in his cheek as it apears to be significantly harder, but hey it is about 7c+ in Rob grades! I had two sessions taking pics of chris whilst he was working the route one from the floor and this one on the rope and I’m very pleased with the result just a shame his t-shirt wasn’t a nice bright prime colour. Chris has already left the UK for his year studying in Spain, gonna miss you buddy, catch up soon. 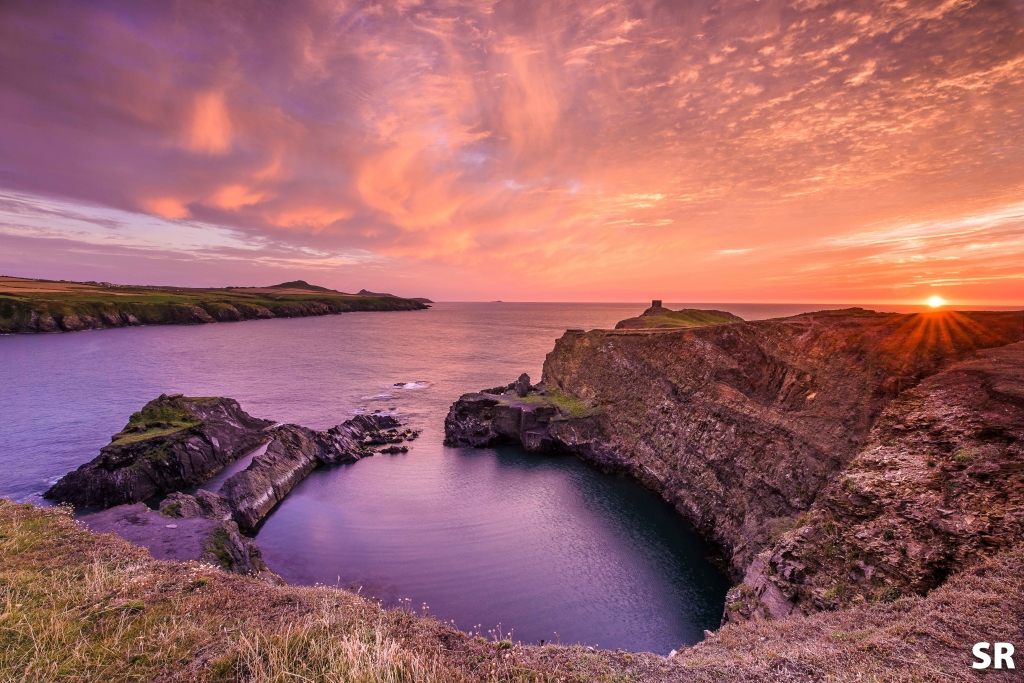 Been busy working on my landscape photography, and I’m especially happy with this shot of the Blue Lagoon. This is somewhere I spent a lot of time in my 20’s taking thousands of people coasteering. Taken whilst on a whistle stop tour of Pembroke with my folks, it was great fun to go for a swim with mum in what turned out to be pretty chilly water, and then wait for the sun to set and produce this great sky #nofilter 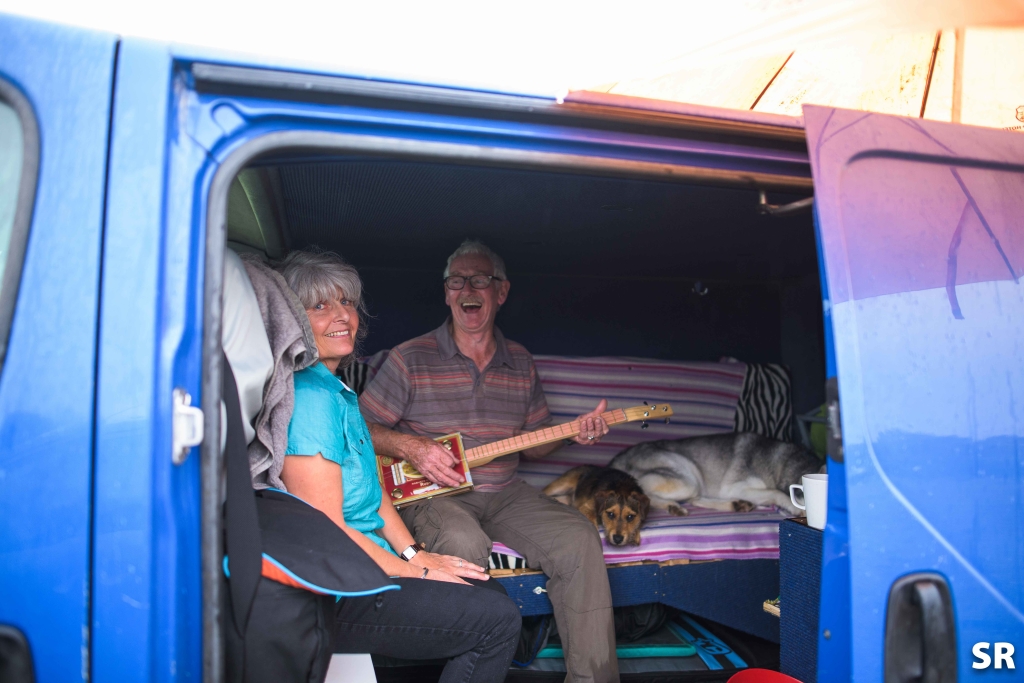 Had a week traveling around West Wales with my parents. Its great when they make it across and doing blasting around one of my favorite parts of Wales was always going to be a winner. Saw some great castles and plenty of the coast although unfortunately it was super flat so there was no opportunity for a cheeky morning surf, Dad made van life a lot brighter with his cigar box guitar playing! 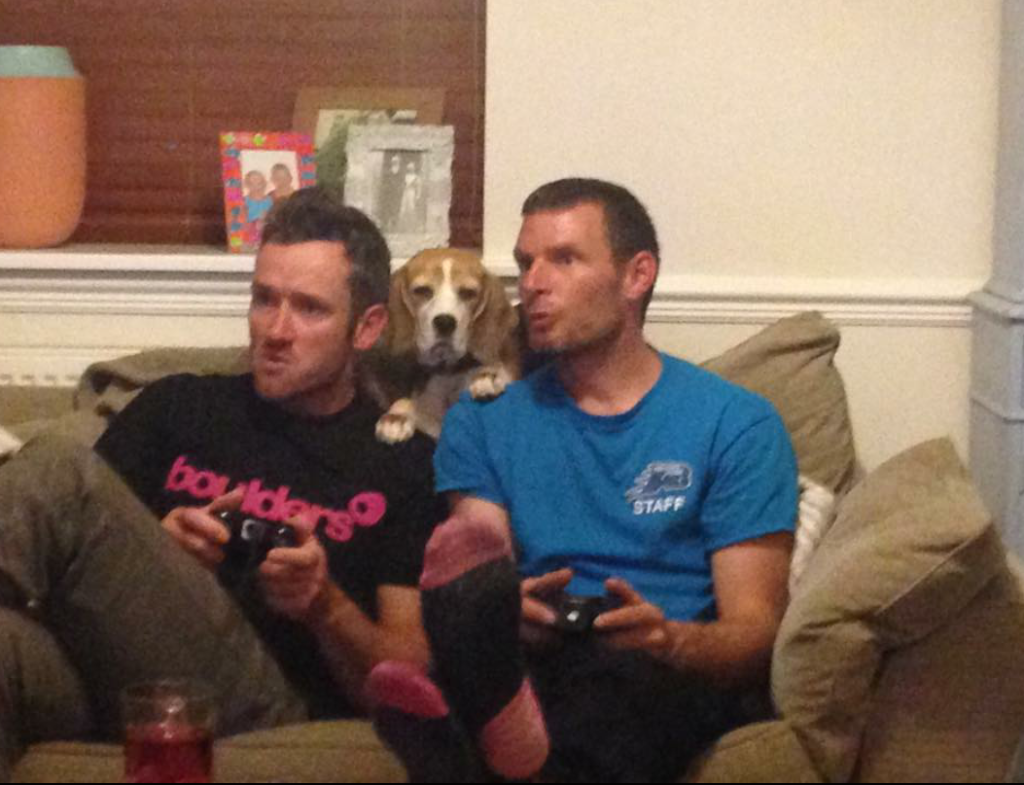 Maya keeping an eye on our Xbox skills

Looking forward to a holiday to Portugal soon with Rhod and Andy for a bit of a surf adventure . Its been a long time since I went on a holiday that included no work. Some how Portugal has never been on my must visit list but it looks amazing.  Hopefully we should get a mix of DWS and Surfing as well as explore a bit of Portugal. 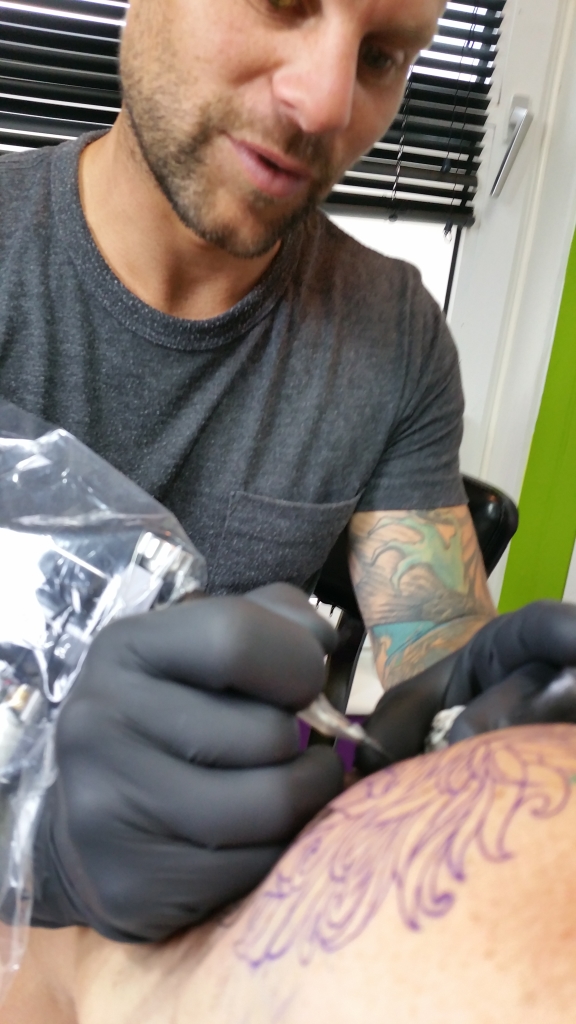 Also had some a new tattoo from Andy at his place, check out Hidden Jewel Tattoo Studio or on Facebook to see some of there amazing work! the only downside is I have to know stay out of the water until it is healed and I’m super keen to get loads of surfing done before Portugal. But after Andy did my Phoenix tattoo, which is amazing, I was super keen for him to do the next one and when he said he had a time slot ……

Its been a long time in the making but Shipwreck cove is officially open! Obviously we have all been climbing here for some time, but after the very successful crowd sourcing Roy Thomas his buddy Dai, Adrian and myself set about bolting up many more climbs. Most of these new routes are in the 5’s and 6’s and offer some fantastic climbing straight of one of Gower’s finest beaches. 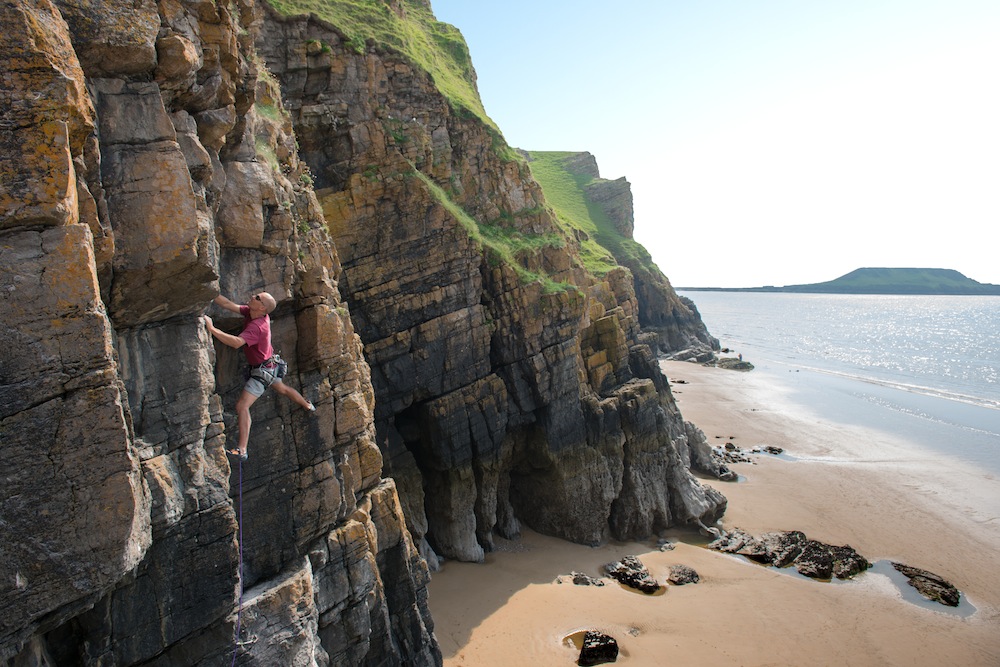 Adrian enjoying the fruits of his labour

It had taken around a year for this second spree of development to take place and we should be grateful to the amazing amount of work put in by Dai and Roy in getting us to were we are today. The cove and its adjacent walls house just over 70 routes that have been bolted using Jim tit’s Twizzles, a glue in anchor that should be long lasting.

The topo above is from the great Wiki available on the South Wales Mountaineering club website and has all info about shipwreck cove, also there is the rock fax download which covers the whole of Gower for sport climbing and can be used on your smart phone at the crag!

The previous weekend saw a mass of climbers meet up at the cove, all invited after they pledged there hard earned cash to the bolt fund. Around 80 climbers attended a great day and almost all of the lines saw ascents with many seeing more ascents in a day than they will probably receive over the remainder of the season. Dave Pickford managed to put a new line over the weekend with an amazing looking F8a+ ‘Delta Dagger’ and it was amazing to See Cai Bishop Guest tick his first 8th grade route with his blast up ‘Airshow 8a+’. Whilst all of this was going on TCA, the bouldering guys and girls from bristol who donated a large amount of wonga to the project, provided a great BBQ for the day and some prizes for the guess the grade competition.

Dave Pickford on Delta Dagger 8a+

As if this wasn’t enough Ben West was back in town to finish off the ‘Proj’ as it had become known. This route was actually the first route i bolted in the cove but soon after i bolted the super steep Achilles and that had taken up all of my time, and belayers patience! At the same time Ben had ticked almost all of the routes in the cove (Vernenne is still not done Ben!) So i offered the line to him. He took up the challenge and after some 12 sessions he finally clipped the chain, in doing so South Wales has a new hardest sport route, Helvetia 8C.

Ben on his new 8C

So I have several more routes on my tick list know thanks to all this bolting, all thanks to the Cove!