After hours and hours spent building the new ‘Arc’ bouldering wall at the climbing centre, I could finally have a few days off. But time off never seems to be time off like I remember it. These days days off are filled with work for other people, I’m not complaining the credit card bill is dropping at a nice steady rate so long may it continue. So day of number one was working for the BMC with a outdoor day at Foxhole Cove.

This crag has a lot of fond memories for me being one of the venues on Gower I have spent the most time climbing. I still remember my first real visit with Jon bullock, climbing Joy Da Viva 7a and some other great lines. I also had a six month battle establishing the hardest route on Gower, at the time, Surplomb de Ray 8b. The route is one that does not stand out as an amazing line and in truth is probably on no ones must do list, but it was an important one for me. I was keen to leave my mark at Foxhole, I was also keen to attempt a line that was not my style and ‘Surplomb’ was the perfect test being essentially a boulder problem. In all I estimate it took around 60 visits to finally link together, with around 3 visits a week over 6 months! 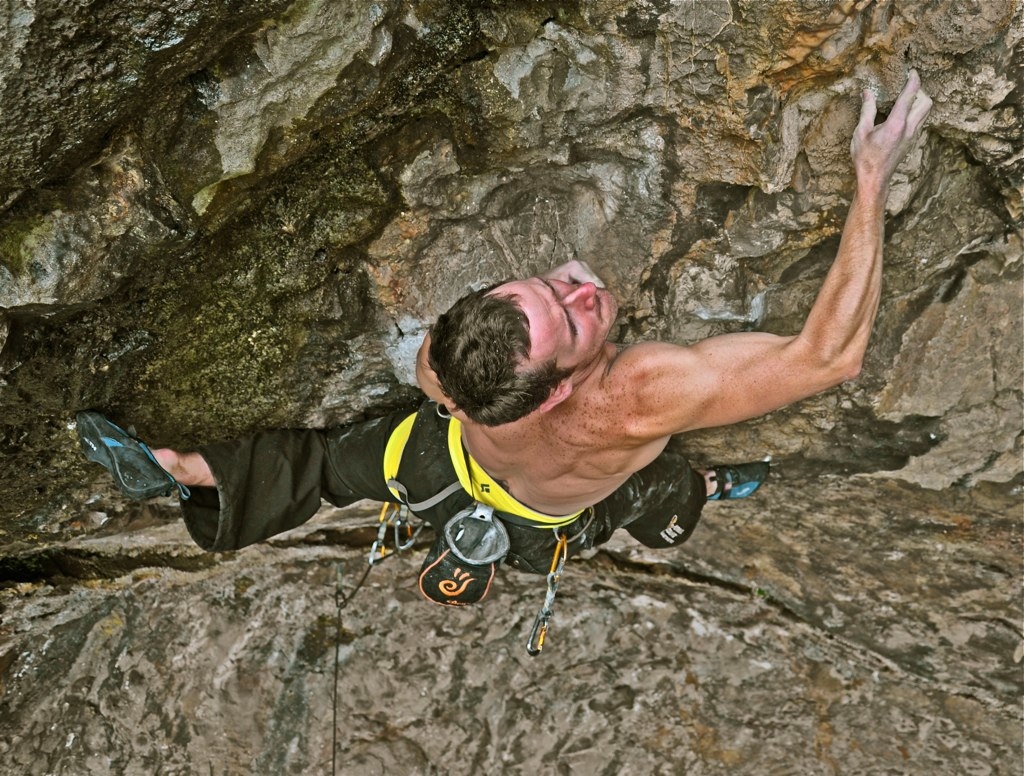 I have not since nor am I likely to again invest so much energy and time into a route. All that said every time I go to Foxhole its great to see ‘Surplomb’ and remember the battle and how much it taught me about climbing and training. I am often asked about the name which is a reference to my dad, Ray. I finally climbed the line on Farthers day giving me a great excuse to name a route after my dad who is my hero. Add to this my poor french skills and you have Rays Roof, as the line takes on a very steep roof like feature – it being bolted french seemed the obvious way to go. 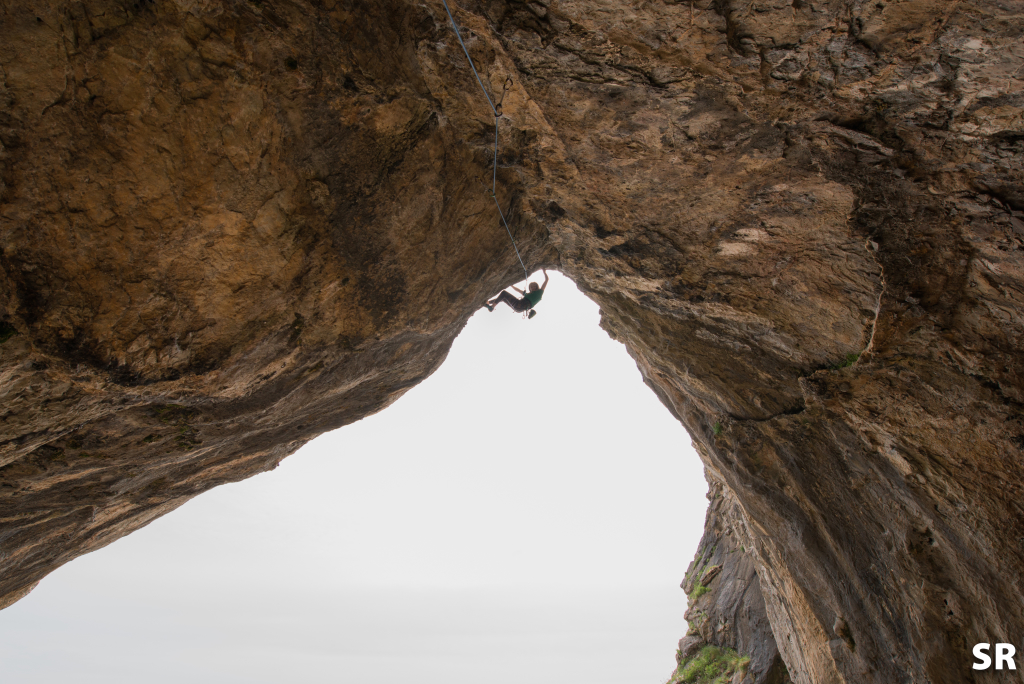 Emily high on Pioneers 7b, on the same roof as Surplomb De Ray

Any way this time I was here with some up and coming youngsters as part of the BMC drive to help young climbers take their indoor skills outside. This infact was the 3rd such day I have run over the past two months and as with the previous two the weather was on our side. The Phillips family were todays climbers with Emily and Oscar being part of the academy I run at boulders. We had a great day with Both Emily and Oscar climbing 7a and there two younger brothers having the first go at climbing outside on some of the crags easier outings. I really hope this will see a start in them getting outside more this summer as they are undoubtledy hard working talented young climbers and this would give them more avenues to establish goals and develop themselves away from competitions. 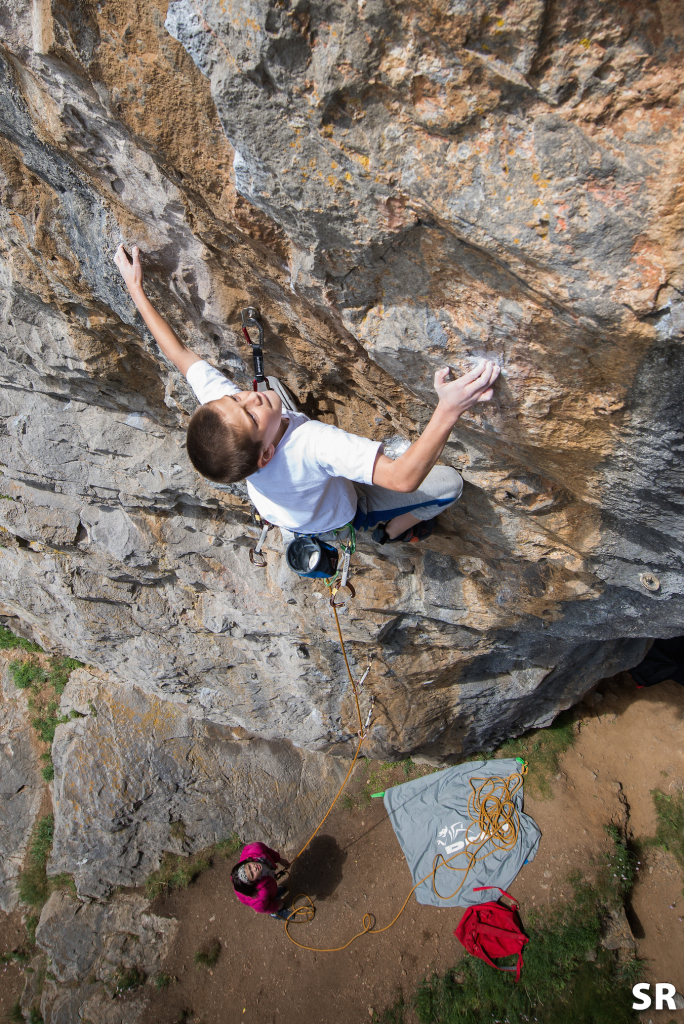 Also on the good news was that with a second day off I could finally do some work in the garden. Know I’m no garden expert but I do enjoy outdoor space. Living on Gower gives me so much amazing outdoor space that it is easy to neglect the garden. That coupled with the fact that we rent means the incentive to financially invest in the plot of land out back of the cottage is not high.

Fortunately for us our landlord is a great guy (although we have barely ever met), and he agreed that we could forgo a months rent if we invested in the garden. This seems a great concept  allowing us both to gain from the situation. So fresh from building at boulders it was straight to work in the garden creating a new decking area to replace the collapsing patio. Ripping out the forest of crap that was behind the patio revealed a large space that was previous undiscovered by man, and with help from Rhod the decking was smashed out in several hours. This has transformed the garden in to a great space for summer BBQ’s and many more Gower gold evenings plus the dogs seem to have found the summer chill out area!

Know onto the bad. So after finishing the decking me and Rhod were feeling quite happy with ourselves. At this point the wind was gusting at around 60mph and the rain had become harsh. But we would not be stopped in enjoying the few hours of light remaining , and with hope that sheltered spot might produce some ridable waves an evening surf would be on the cards. When we arrived at our chosen break, it was working (although a bit smaller than we had hoped). Suiting up quickly we made a dash to the water as it was a struggle to simply hold your board in this strong wind. Surfing is so much fun and although I’m utter crap I generally can’t get enough so even though conditions were far from perfect with the strong cross/off shore I immediately had some good rides. After 2 hours or so I was considering getting out as the tide was abnormally high  and the wave had died down from a promising start when a short wave ended in disaster. As the wave was fizzling out I jumped of my board only for the wind to pick it up a throw it into my face. The impact was hard and the crunch sensation followed by spurting blood left me little doubt about the state of my nose. 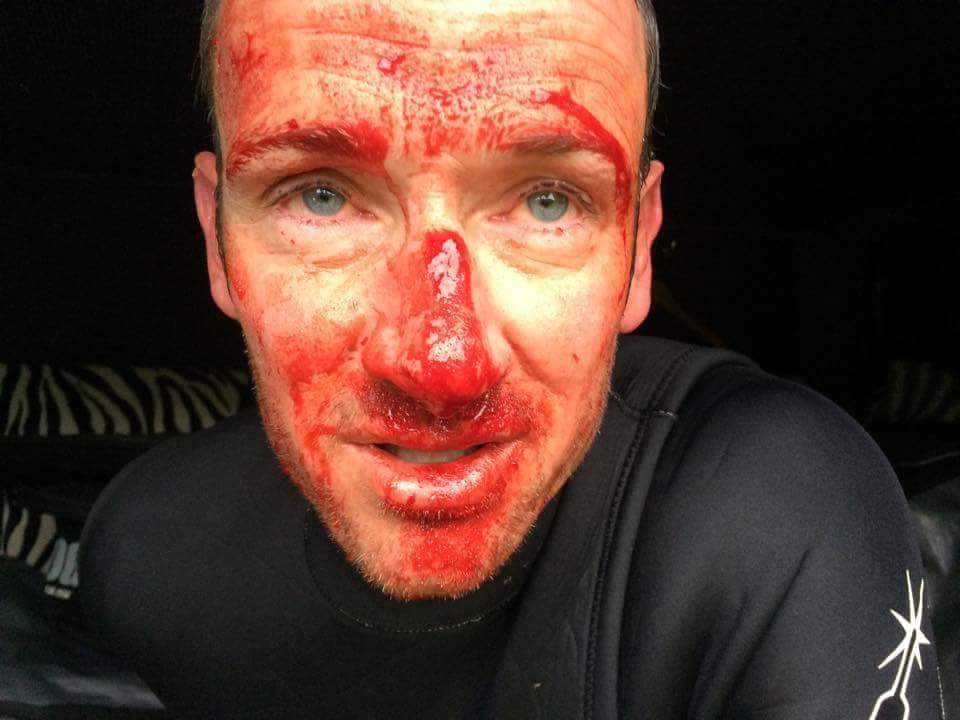 Fortunately Rhod followed me in a drove back to the house whilst I held my nose together. After about an hour the bleeding stopped and apart from swelling and a few sore days there is little lasting damage (I have previously broke my nose, This break may of in fact bent it back a bit the other way). And with that its bags packed ready for Austria and the Imst Youth Colours festival for some of the climbers I work with!